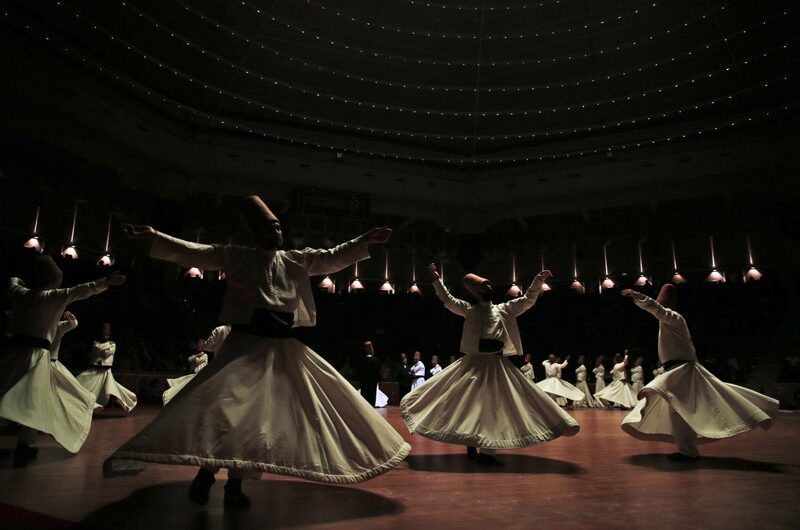 The main condition of existence is to spin. Man comes from the soil and returns to the soil. The purpose of the Dervishes is to turn around the truths, to develop with love, to get rid of their ego, to find reality by reaching perfection and to feel perfection.You should watch the whirling Dervish show to feel the love message of Mevlana in your heart that embraces all humanity .

“Come, come again, whoever you are, come!
Heathen, fire worshipper or idolatrous, come!
Come even if you broke your penitence a hundred times,
Ours is the portal of hope, come as you are.”

Who is Mevlana Celaleddin Rumi?
He is a poet, sufi scholar,Anatolian mystic and Muslim saint lived in Konya in the 13th century. He is the symbol of love peace , brotherhood, and tolerance.
What is Mevlevi order?
Mevlevi Order was founded by Mevlana Celaleddin Rumi in the 13th century which consists of people known as Dervishes that go through the Mevlana road.The Order based on tolerance, forgiveness, and enlightenment.

What is the meaning of Dervish?

Dervish means ‘’doorway’’ and is thought to be an entrance from this world to the spiritual heavenly world.

What is the aim of Dervishes?

They aim to reach the source of perfection in worship ceremony .This is sought through abandoning one’s egos and personal desires, by listening to the music, focusing on God, and spinning one’s body in repetitive circles.

What is the Sema ceremony(whirling Dervishes)?

The Sema ceremony is a religious ritual practiced by the sufi Dervishes of the Mevlevi order. Mevlevi believed that during the Sema the soul was released from earthly ties, and able to freely and  ubilantly communicate with the God. At their Sema, a particular musical repertoire called ayin is played.The Dervishes begin to rotate on their left feet in short twists, using the right foot to drive their bodies around the left foot. At the beginning of the Sema, by holding his arms crosswise, the Dervish appears to represent the number one, thus testifying to God’s unity.

What kind of symbolism can we see in Whirling Dervish Ceremony?

The semazen’s hair hat (sikke) represents the tombstone of the ego.His wide, white skirt represents the ego’s shroud. By removing his black cloak, he is spiritually reborn to the truth. -Whirling Dervish Ceremony starts at 18.00 in winter and 21.00 in summer.The ceremony takes approximately one hour and we offer you & which is traditional and religious drink,after the ceremony. -It is forbidden to take photos during the ceremony.You will be time to take photos at the end of the ceremony.